The winding has at least three taps where electrical connections are made. Since part of the winding does "double duty", auto transformers have the advantages of often being smaller, lighter, and cheaper than typical dual-winding transformers, but the disadvantage of not providing electrical isolation between primary and secondary circuits. Other advantages of auto transformers include lower leakage reactance, lower losses, lower excitation current, and increased VA rating for a given size and mass.

“Servomate” Autotransformer are often used to step up or step down voltages in the 110-115-120 V range and voltages in the 220-230-240 V range - for example, providing 110 V or 120 V (with taps) from 230 V input, allowing equipment designed for 100 or 120 V to be used with a 230 V supply. This allows US electrical equipment to be fed from the higher European voltage. Auto transformers can also be used to supply European 230 V appliances from a 100 or 120 V supply in countries outside Europe. In all cases the supply and the autotransformer must be correctly rated to supply the required power.

“Servomate” Auto Transformer has a single winding with two end terminals, and one or more terminals at intermediate tap points, or it is a transformer in which the primary and secondary coils have part of, or all of their turns in common. The primary voltage is applied across two of the terminals, and the secondary voltage taken from two terminals, almost always having one terminal in common with the primary voltage. The primary and secondary circuits therefore have a number of windings turns in common. Since the volts-per-turn is the same in both windings, each develops a voltage in proportion to its number of turns. In an autotransformer part of the current flows directly from the input to the output, and only part is transferred inductively, allowing a smaller, lighter, cheaper core to be used as well as requiring only a single winding. However the voltage and current ratio of auto transformers can be formulated the same as other two-winding transformers: 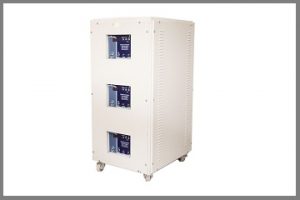